No-one could predict the future when Sphere 43 Ltd was formed in 2002.
The new ‘All Round Thinking’ marketing resource was a spherical mystery,
summed up by the photograph below. 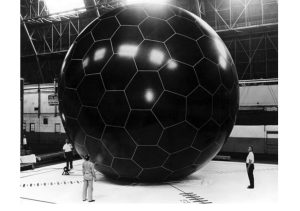 “Anyone know what it is?”

2002 was the year of the Queen’s Golden Jubilee (50 years). Gareth Gates
was the UK’s most searched male name on the internet after he came second
to Will Young on Pop Idol. Tony Blair and George Bush dominated the news.

In its formative years, Sphere 43 worked with several marketing agencies
in the north, northwest, midlands and London, as well as adding a small
number of UK-wide direct clients, mainly in the construction sector.

Moving from print to digital

In the second decade, from 2012, the balance swung the other way
and today, digital campaigns vastly outnumber print-based work.

About the Author: Wayne